Disclaimer: Any comments I make are purely satirical, totally without foundation, and Sean who? Was the gringo married to someone famous once?

Jennifer Lopez kicked off her All I Have Las Vegas residency (cheekypopdivadigest
.blogspot.co.uk).

Dani Thorne tongued blade at dinner—remarkably useful for slicing a joint—welcoming in the New Year at The Barton G. Los Angeles (celebritytonguedigest
.blogspot.co.uk)…

• Yes, Kaley Cuoco had her pants pulled down after peeing in “The Fappening” (Pick of the Week, 17th September 2014)

Petite popstrel in perpetuum Joanna “JoJo” Levesque poked it looking ready to “kick the shit out of Option B” (celebritytonguedigest
.blogspot.co.uk).

Thankfully moving on from that fight…

Getting body painterly for Barcelona…

And was busted in the bathroom.

“LAS VEGAS—Riley Reid became the surest bet in Vegas Saturday night in what turned into a historic haul at the AVN Awards Show. The 24-year-old native of Miami Beach captured six awards, including the AVN Female Performer of the Year honor, at the 33rd annual ceremony.”

Certainly much deserved, and a treasure to a $14 billion plus industry in the US having won Best Three-Way Sex Scene with Remy LaCroix back in 2014 (Pick of the Week 22nd Jan. 2014).

“An exhibition combating negative self-image in a square in Copenhagen has been closed down by police.

Photographer Mathilde Grafström snaps women who don’t have traditional model looks, for a photo series called Female Beauty. ‘I take my photos to show young women that they are more beautiful than they think. I show the woman that she is beautiful, and that way I can help her to accept herself,’ she told Denmark’s TV2.”

“A crazy-eyed, bloodied god figure armed with a Kalashnikov is the cartoon on the cover of the special edition marking the first anniversary of the ‘Charlie Hebdo’ attacks in Paris. The headline claims: ‘One year on: The assassin is still at large.’”

A not altogether Islamic but indeed more Judeo-Christian looking “crazy-eyed, bloodied god figure armed with a Kalashnikov” it might be added—which is indeed though the same monotheistic God in the Quran or Holy Bible having killed off any polytheistic competition long ago—reminding that Charlie Hebdo has always ridiculed religion whatever it denomination.

But seemingly same God or not, a difference in demeanor is still noted in his peoples:

“A cartoon in the French satirical magazine Charlie Hebdo has caused online shock by suggesting drowned toddler Alan Kurdi would have grown up to be a sexual abuser like those immigrants allegedly involved in the assaults in Cologne. Under the headline ‘Migrants’, the drawing shows two lascivious pig-like men with their tongues hanging out chasing two terrified, screaming women who are running away. An insert at the top the cartoon contains the famous image of the three-year-old Syrian boy laying face down dead in the sand. The question at the top of the drawing ‘What would little Aylan have grown up to be?’ is answered at the bottom by ‘Ass groper in Germany’.”

Physics: Could humans have reached the end of the line for scientific knowledge? Scientists think so (ibtimes.co.uk).

Seemingly we may be entering a new era in physics, scientists conclude, an era where there are weird features in the universe that we cannot explain and may never be able too.

But what would the oft said dead discipline of philosophy have to say? Is Plato smiling in his allegorical cave surrounded by his un-knowledgeable perfect Forms and what of the stuffed monkey who knew that—or maybe not, that being the nature of scepticism and truth—packing Fyffes bananas instead. 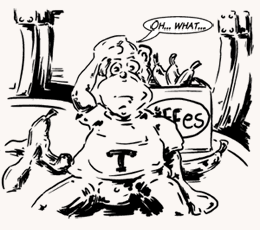 What will his escape be this time, commandeered Amazon drone from San Diego lifting him out off a maximum security roof?

But details of his capture proved just as intriguing involving “journalistic” interview with Sean “The” Penn.

Oh, Chapo wasn’t in the least interested in him, but rather in tequila brand interview promoting Mexican actress Kate del Castillo for whom it was reported he’d had penis enhancement surgery.

And sadly, of course…

David Bowie dead at age 69 after battle with cancer (eonline.com).

“David Bowie has passed away, just two days after his 69th birthday. The legendary singer’s Facebook page posted the tragic news Sunday evening, writing, ‘David Bowie died peacefully today surrounded by his family after a courageous 18 month battle with cancer.’ The statement continued, ‘While many of you will share in this loss, we ask that you respect the family’s privacy during their time of grief.’”

“The English actor Alan Rickman, who was best known for his role as Severus Snape in the Harry Potter series, died aged 69, from cancer, in London on January 14, 2016. Rickman was an accomplished stage actor, playing several of the great Shakespearean leads, as well as proving his range in comic, tragic and leading roles on the big screen.”