Who’s death, let no one be in any doubt, has been found by an autopsy to have been murder (theguardian.com).

Pink said ‘You are the epitome of white privilege’ as she responded to criticism over her Instagram post about Black Lives Matter (buzzfeed.com).

"You are the epitome of white privilege and the saddest part is that you don't even hear yourself and probably never will."

Although some suggest much of the outcry on social media is exemplar of virtue signalling (Wikipedia):

Singer Kehlani posted about the black tiles and the risk that they could drown out useful information. Others criticised participation in the initiative as performative and “virtue signalling.” Musician Bon Iver tweeted: “I love you all, but this music industry shutdown thing feels tone deaf to me,” before deleting the tweet.

He wrapped enormous buildings, avenues of trees, entire coastlines and island chains. Each one cost millions with official permission almost impossible to get. Yet, when finally completed, they were gone again in a matter of weeks.

Christo, who always worked with his wife Jeanne-Claude, famously covered the Reichstag in Berlin and the Pont-Neuf in Paris with reams of cloth.

With those ephemeral landmarks in fabric or plastic installations initially credited only under the Christo name, but later to both Christo and Jeanne-Claude, with his Moroccan-born wife passing away in 2009 but having already made a pact that the other would continue the works which required technical solutions along with political negotiations that had “brought people together”.

Obituary: Christo Javacheff, the artist who wrapped the world (bbc.co.uk).

He wrapped enormous buildings, avenues of trees, entire coastlines and island chains. Each one cost millions with official permission almost impossible to get. Yet, when finally completed, they were gone again in a matter of weeks.

It was a life of herculean tasks. His determination to see them through never dimmed.

#RIPChristo (Instagram, certainly by Fidiotbook and now requiring login to see posts. If you do not wish to login, simply right-click on a post and view in a new tab).

With lockdown restrictions in Blighty being as cautiously lifted as is possible when seemingly the real need to do so is more to distract from the scandal of Dominic Cummings, the senior aide Brain part of the Pinky and the Brain PM duo, having had a day out at a castle, with BoJo telling even the medically vulnerable they can indeed go out as of tomorrow as reward for their “patience and sacrifice” as long as they are careful to follow the social distancing guidelines involving staying two meters apart from the one friend or family they choose to meet up with:

Sex in your house with a person from another household illegal from today (mirror.co.uk).

Up until now the person visiting a house for sex would have been the one in breach of the measures. But now both people would technically be able to be prosecuted under the law, with Amendment Regulations being introduced in Parliament on Monday.

With new legislation introduced that explicitly bans being inside the house in a gathering of more than one person without a reasonable excuse, even though seemingly you can nip through the house as long as you don’t linger or touch anything on the way their garden in which as of next week up to six will be able to meet.

The government is introducing new lockdown measures in England that prevent people from socialising (or gathering) with one person from outside of their household in a private space.

Up until now the person visiting a house for sex would have been the one in breach of the measures.

But now both people would technically be able to be prosecuted under the law, with Amendment Regulations being introduced in Parliament on Monday.

No doubt having curtain twitching neighborhood watch readying to level their binocs not only at No.9’s upstairs window for evidence of transgressions but on the field out back too in case any try the workaround of a roll in the hay, with the red-top reminding that sex in a public place is already illegal, but not addressing the etiquette as to whether to clap on not on discovery.

But regards whether Inspector Knacker is likely to knock asking to be let in on the performance:

Adding that no further powers have been given to enter someone’s home for breaking the lockdown rules, unless “serious” crime is suspected—with it debatable as to whether the keeping on of socks during the the act classifies as such—and perhaps saving Knacker from the traumatic experience of the surrealist scenario of busting in to find the lovers in flagrante delicto wearing nothing but fellow red-top’s cut-out-and-keep “do whatever the hell you want” Dominic Cummings face masks (dailystar.co.uk) as as part of surreptitious lockdown safe sex defense.

Grimes is selling a ‘fraction of her soul’ at online art exhibition (pitchfork.com).

Grimes’ art is the subject of a new online exhibition titled Selling Out, Bloomberg News reports. She’ll be selling drawings, prints, photographs, and conceptual pieces in the show, which is hosted by Gallery Platform Los Angeles (from May 28–June 3) and Maccarone Los Angeles (May 28–August 31).

The most notable piece in the collection is a conceptual piece, also called Selling Out, that finds Grimes selling part of her soul for the “best offer.”

A part of the Miss Anthropocene’s virtual psyche algorithmic code that predestined her to marry and be impregnated by bullied-turned-bully tech entrepreneur Elon Musk perhaps, a narrative that is surly pending a Strange Days or Blade Runner-esque script at some point in the future. 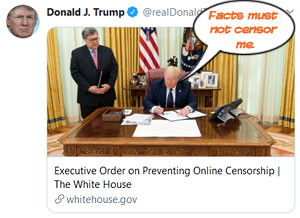 Twitter has hidden one of President Donald Trump’s tweets from his profile, saying it violates rules about glorifying violence.

After Twitter’s faecal bearded, formally Myanmar retreating, and still cryptocurrency evangelistic CEO Jack Dorsey finally decided that, despite being “newsworthy”, the public does indeed need to know which alt-end Orange Don is talking out of by tagging one of his re-election campaign preparatory tweets with a fact-checking warning, resulting in him immediately retaliating with the relentless intimidation and bullying which is the stock-in-trade of his deplorable base, threatened to “strongly regulate” or even “close down” social media platforms seemingly if they did not let him use it to continue defining facts irksome and irrelevant in making America great again…

Leading to Twitter upping the ante by hiding one of his tweets, saying it violates rules about glorifying violence.